Get your shit together.... here come the Zombies.

'Zombie ants' may sound like the title of an Ed Wood movie, but, according to National Geographic, they are quite real.

Oddly, there's nothing very zombie-like about the actual ants. It's only when a particular fungus takes over the ant's brain that things get weird.

Once the "stalk of the newfound fungus species Ophiocordyceps camponoti-balzani infects an ant, the ant gives up control over its own body. After the fungus is in control, it forces the ant to scamper toward "a location ideal for the fungi to grow and spread their spores." Then, it's lights out for the ant. Who knew a fungus could be so diabolical?

These wild discoveries were made by a group in Brazil headed by entomologist David Hughes. National Geographic published a series of pictures of ants that have "lost their minds" to the fungus. You can check out a sample of them below. Not for the squeamish. 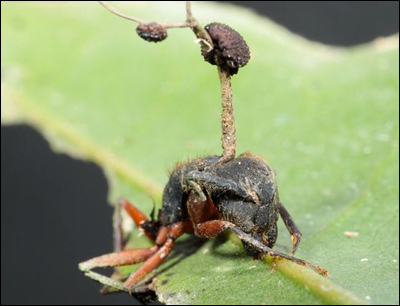 This reminds me of the caterpillar that seeps yummies for ants in return for protection and structure building.. craziness.

And ants who become infected with a particular parasite that makes them crawl the end of a leaf and hang by their jaws until an herbivore comes by, accidentally consumes the ant with the leaf, and is thus infected with the parasite now.

Ooooh!! and the wasps that lay their eggs INSIDE the caterpillar and completely brainwash it with their chemicals??

heehee, I <3 this thread

Hubby said... if it could happen to them, who is to say that a fungi couldn't pop up that did the same to us.